Grant Remmen, a graduate student in theoretical physics at Caltech, and his younger brother, Cole, who majors in theater arts at the University of Minnesota, have long shared a passion for musical theater. For years, they had discussed creating their own work, including songs, lyrics, and script.

Seeking inspiration, Grant, whose work at Caltech involves high-energy physics related to gravity, turned to space. What he found, besides the actual universe, was a version represented by the Star Trek television series of the 1960s.

"The topic of Star Trek was natural for us," explains Grant. "We always loved the show." The result, entitled Boldly Go!, will have its world premiere at Ramo Auditorium on the Caltech campus February 26–28 and March 3–5, 2016. Brian Brophy, a lecturer in theater at Caltech, will direct.

The production features 19 original songs and 20 scenes. Grant describes it as a "loving parody," which he says combines affection for the material with moments of sheer irreverence. Many of the popular characters are included, such as Captain Kirk, Spock, Doctor McCoy, Sulu, Uhura, and Chekov, plus new ones as well.

"We did this in order to parody musical theater itself, a genre that we enjoy and with which we are very familiar," he adds.

Song titles include "Klingons are Misunderstood," "The Vulcan Way," "Dammit Jim, I'm a Doctor," and "Live Long and Prosper."

Since September 2013, when work commenced on the musical, Grant has cowritten all facets while pursuing his doctorate at Caltech under faculty advisors Clifford Cheung, assistant professor of theoretical physics, and Sean Carroll, research professor of physics.

"I'm excited about my work because understanding the high-energy behavior of gravity and the nature of space-time is arguably the ultimate question in physics," he says.

Grant remains "first, foremost, and always a scientist," and spends most of his days doing research exclusively. During the time he spent developing the musical, he allowed himself small breaks to work on the production, writing bits of dialogue and lyrics whenever possible, which he then sent to his brother for suggestions and edits. Cole did the same in return.

Over the Thanksgiving and Christmas holidays in 2013 and 2014, while the brothers stayed at the family home in Minnesota, they spent hours each day alone together in a room, composing melodies like veteran Broadway composers.

The work on Boldly Go! also included what would be a leisure-time activity under different circumstances. To better understand the nuances of the characters, Grant viewed an estimated 500 hours of Star Trek programming, both film and television.

Watching Star Trek has been popular at Caltech since the 1960s. In January 1968, when NBC was threatening to cancel the program, a group of Caltech students protested the planned move. According to a story about the protest that appeared in the Los Angeles Times, "200 chanting, banner-waving Caltech scholars conducted a torchlight procession through the streets of Burbank to carry a protest to the steps of the National Broadcasting Company."

A national campaign succeeded; NBC renewed the series for 1968–69, before canceling it permanently.

In the spring of 2015, Brophy and Grant conducted a five-week rehearsal of Boldly Go!, which culminated in a staged reading at the Cahill Center for Astronomy and Astrophysics. Many audience members at the event, which was sold out, wore Star Trek T-shirts. "I was overwhelmed by the reaction," says Kelvin Bates, who is playing the role of Captain Kirk.

"At its core," Grant says, "Boldly Go! is a story about being true to oneself and one's convictions, about friendship and love, about discovery and wonder, about the triumph of the individual over adversity, and about the joy of sharing with each other this vast and mysterious universe." 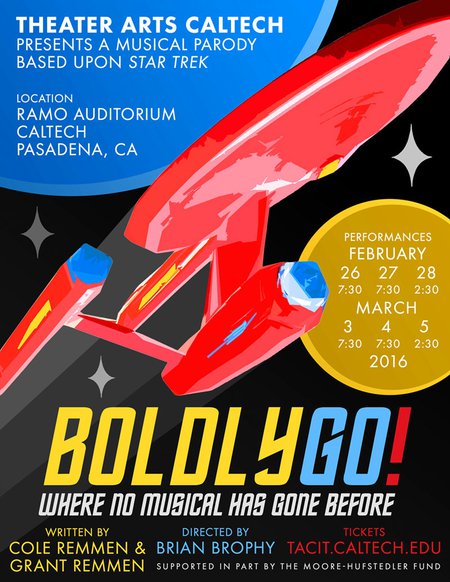 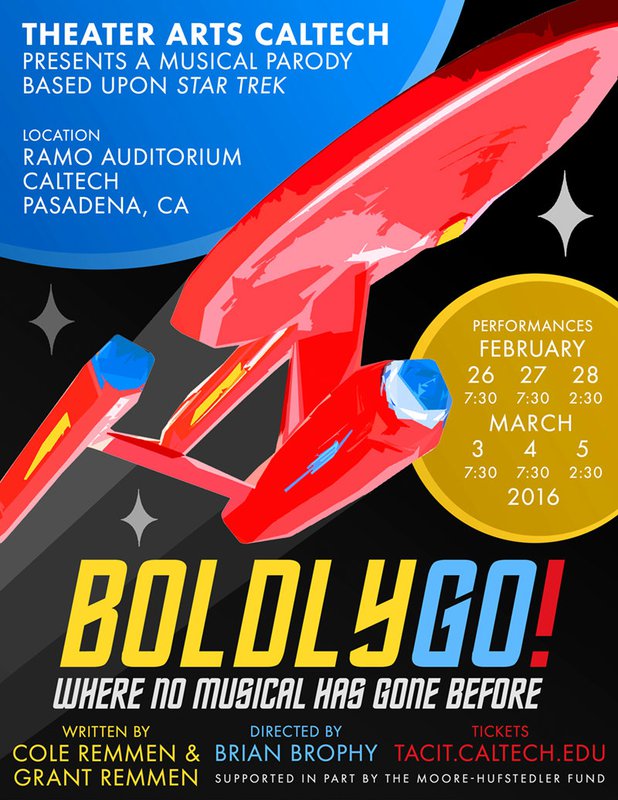