For the sixth season of MACH 33, the Festival of New Science-Driven Plays, Caltech Theater is partnering with the Pasadena Playhouse to present three staged readings beginning on April 30.

Each year, MACH 33—which engages students and staff at Caltech and JPL in the selection, development, and performance of new science-driven plays—culminates in staged readings and fully produced shows in the spring. This year, two of the readings will be performed on the Pasadena Playhouse main stage, and one reading will be held in Caltech's Ramo Auditorium. Each reading will include a post-show discussion with the playwright.

The three plays this season are:

• Theory of Nothing, written by Lolly Ward and directed by Nike Doukas. Pasadena Playhouse; Monday, April 30, at 8 p.m.Max, a condensed matter physicist, and Sugar, a designer, return to their childhood home to pack up the house on the eve of the divorce of their parents: tough-as-nails physicist Brit and sculptor Chuck. When the characters reveal shocking truths about themselves, the entire family is forced to confront questions of honesty, allegiance, and madness.

• Out There Right Here, written by Anna Nicholas and directed by Brian Brophy. Pasadena Playhouse; Monday, May 7, at 8 p.m.It's Autumn, the Santa Anas are blowing, and L.A. is on fire again. Jasper Molloy is an aging Apollo astronaut diagnosed with Alzheimer's; daughter Lucie used to be an archeologist until she found the Lord; and son Hubble is a SETI researcher and atheist who spends his days searching for life in the multiverse. Out There Right Heretakes place at the intersection of science and faith, and asks, "What does it mean to believe in anything?"

• Lie After Lie After Lie, written by Steven Dierkes and directed by Susan Dalian. Ramo Auditorium, Caltech;Monday, May 14, at 8 p.m.In the late 1840s, a Hungarian obstetrician named Ignaz Semmelweis found that the simple expedient of hand washing could help physicians reduce maternal death by up to 90 percent. His discovery was rejected by his superiors—indeed by the whole Western world—and he went mad. Lie After Lie After Lieexplores his story and broader topics in science and society overall.

Tickets for all three shows are available individually or as a group on the Pasadena Playhouse webpage. Tickets are $18 for each reading. A three-show discount package is available for $25 by calling the Playhouse at (626) 356-PLAY and using the code THREEPACK. 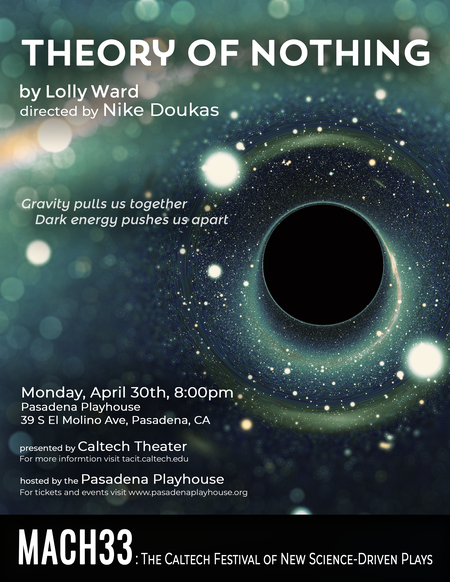 Theory of Nothing, written by Lolly Ward and directed by Nike Doukas, will be presented at the Pasadena Playhouse on Monday, April 30, at 8 p.m.
Image Lightbox 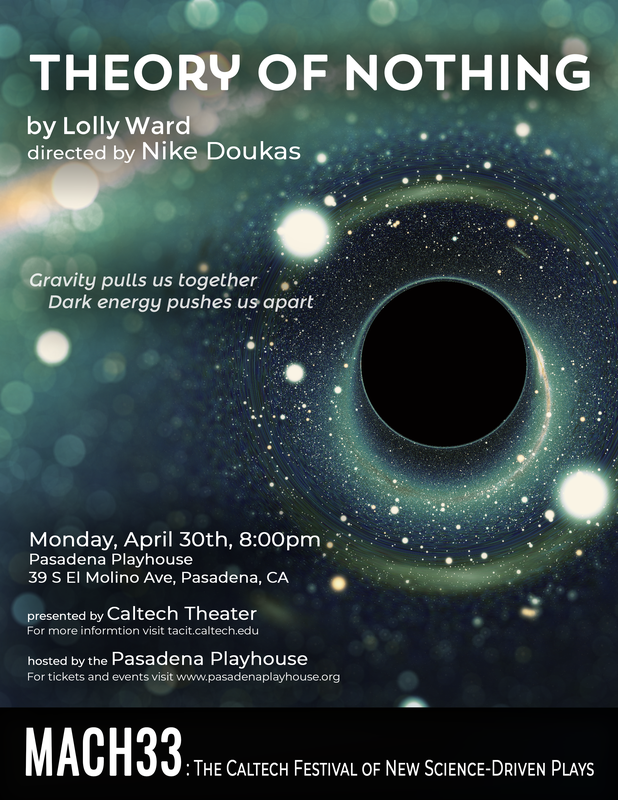 Theory of Nothing, written by Lolly Ward and directed by Nike Doukas, will be presented at the Pasadena Playhouse on Monday, April 30, at 8 p.m.
Download Full Image
Subscribe
The Caltech Weekly