When Science Mentors Art, and Art Plays with Science

"I'm trying to do my best to put science on stage—because science is going to save us."
— Tira Palmquist, author of "Two Degrees"

When Tira Palmquist wrote her play "Two Degrees," focusing on a female climatologist dealing with personal grief and professional strain, she knew she had to get the science—and the scientist protagonist—just right.

Fortunately, the Orange County playwright discovered a ready resource in a four-year-old theater festival called "MACH 33: The Festival of New Science-Driven Plays at Caltech," presented by Theater Arts at Caltech. MACH 33 pairs playwrights with science advisers from Caltech and JPL who can inform the plays' fictional worlds with scientific authenticity and insight to produce richer dramatic works.

Mach 33 linked Palmquist with Jennifer Walker, a Caltech environmental science doctoral student in Simona Bordoni's research group, who helped shape Palmquist's understanding of her protagonist's work. For example, Walker suggested specifying that the character, originally conceived as a "climate scientist," be recast as a specialist in paleoclimatology—someone whose job is literally to drill deep into the past. The change presented the author with an unexpectedly rich metaphor for the protagonist's desire to understand her own personal history.

Walker says her six-week stint as a science adviser "was interesting and exciting. I had never been involved in theater before and to see this story—especially about a person in a related field—come to life on stage was really fun. There aren't a lot of plays about scientists, so it's nice to have that kind of representation." She praised the program as a means of making science more accessible and welcoming to lay audiences "and helping engage people and open up a whole world for those who might not be thinking about science."

In 2013, Caltech formalized the festival, to allow for development of new plays at the nexus of science and art. Since then, MACH 33 has featured plays dealing with such scientific subjects as climate change, quantum information theory, the discovery of Pluto, space flight, cold fusion, and ecology. MACH 33 refers to both the speed at which an object on earth reaches escape velocity and breaks free of its gravity—about 33 times the speed of sound—and, more figuratively, to the innovative, dynamic breakthroughs that the scientists and artists achieve together. This year, the Caltech student-driven theater group EXPLiCIT has joined the team to help produce and develop the festival.

To find plays, Brian Brophy, director of Theater Arts at Caltech since 2008 and artistic director of Mach 33, and Arden Thomas, associate artistic director of MACH 33, solicit submissions by playwrights from Caltech, JPL, and the larger Los Angeles community. Playwrights of chosen works are then matched up with science advisers—usually Caltech PhD students—who work with the playwrights for several months developing the science in the plays. During that collaboration, there may be several informal readings of the plays to provide the playwright with additional feedback. Thomas said writers consider the festival to be extraordinarily useful, noting, "They leap at the chance to get the science right."

After workshopping the plays throughout the academic year, MACH 33 stages readings of the plays during a festival in the spring. This month, MACH 33 has presented four such productions, including a comedy about selling your soul for science, a historical fantasy about the discovery of Pluto, a play about the Los Angeles aqueduct and the drought in the Owens Valley, and a screenplay about Subrahmanyan Chandrasekhar, winner of the 1983 Nobel Prize in Physics.

Brophy says that, through MACH 33, the playwrights and scientists have been able to work together to produce scientifically accurate drama by balancing the needs of art with the rigor of science. "You don't want to sacrifice the theatrical, artistic element of the play just to get the science right," Brophy explains, "but at the same time you don't want to sacrifice the science to have a piece of theater. These two things have to work together."

In the end, Thomas says, science and art are often two sides of the same coin: pushing boundaries, seeing the world in novel ways. "Scientists and artists are doing the same thing," she notes. "They're creating, they're discovering, they're taking risks, they're failing—and they're trying again." 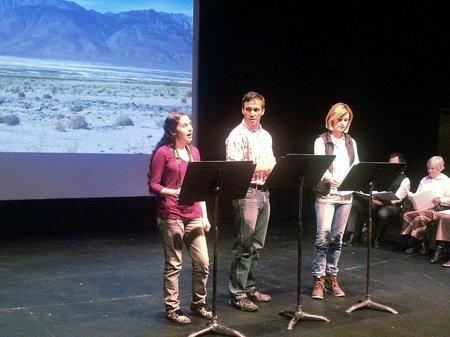 Performing a staged reading of The Chisera on Earth Day in April are (from left): Lydia Kivrak, Caltech undergraduate astrophysics student; Robert Vestal, an actor with the Native Voices Artists Ensemble at the Autry; and Carrie Ancker, artistic associate at Theater Arts at Caltech. Credit: Courtesy of Arden Thomas
Image Lightbox 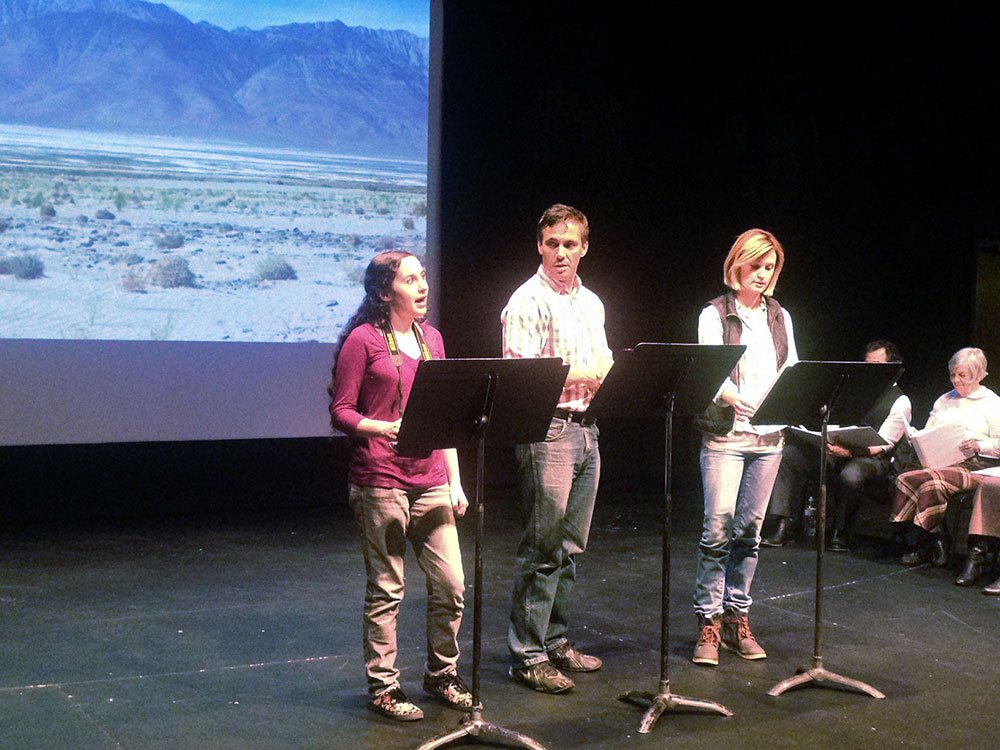 Performing a staged reading of The Chisera on Earth Day in April are (from left): Lydia Kivrak, Caltech undergraduate astrophysics student; Robert Vestal, an actor with the Native Voices Artists Ensemble at the Autry; and Carrie Ancker, artistic associate at Theater Arts at Caltech.
Credit: Courtesy of Arden Thomas
Download Full Image
Subscribe
The Caltech Weekly