Avenue Q is a coming-of-age parable, satirizing the issues and anxieties associated with entering adulthood. The musical makes great use of puppets, animated by puppeteers alongside human actors.

Directed by Dr. Teagan Wall (CNS '15), Q brings her back to Caltech to "work with the wonderful nerds she loves."  When asked what Avenue Q still offers our audiences after fifteen years in circulation, Wall said: "This show explores question of identity, purpose, bias, and belonging without getting preachy or condescending. It punches up and tackles major social issues in a way that is entertaining, while providing a much needed reminder to stop taking life so seriously."

The music and lyrics were written by Robert Lopez and Jeff Marx and book by Jeff Whitty. The show won Best Musical, Book, and Score at the 2004 Tony Awards. The show was directed by Jason Moore with puppets designed and built by original cast member Rick Lyon. Caltech Theater puppets designed and built locally by Roberto Ferreira. Brenda Varda returns to Caltech as Musical Director.

Caltech Theater, under the direction of Brian Brophy, has continued the legacy of musical theater begun by his predecessor Shirley Marneus. With the strong support of students, staff, and faculty, as well as other members of the Caltech/JPL community, Caltech Theater has produced: I Love You You're Perfect Now Change (2010), A Funny Thing Happened at the Forum (2011), Little Shop of Horrors (2013), Rent (2014), Alice Through the Wormhole (an original adaptation of Alice through the Looking Glass, 2015), Boldly Go! (an original musical parody of Star Trek, 2016), and Sondheim's Company (2017). Avenue Q joins this string of classic musical theater gems over the past ten years.  With all of its quirky, edgy and thought-provoking messages, Q features Caltech undergraduates, graduate students, and other members of the Caltech/JPL community.

Avenue Q opens on February 22 and closes March 3, with performances on Fridays and Saturdays at 7:30 p.m. and Sundays at 2:30 p.m. 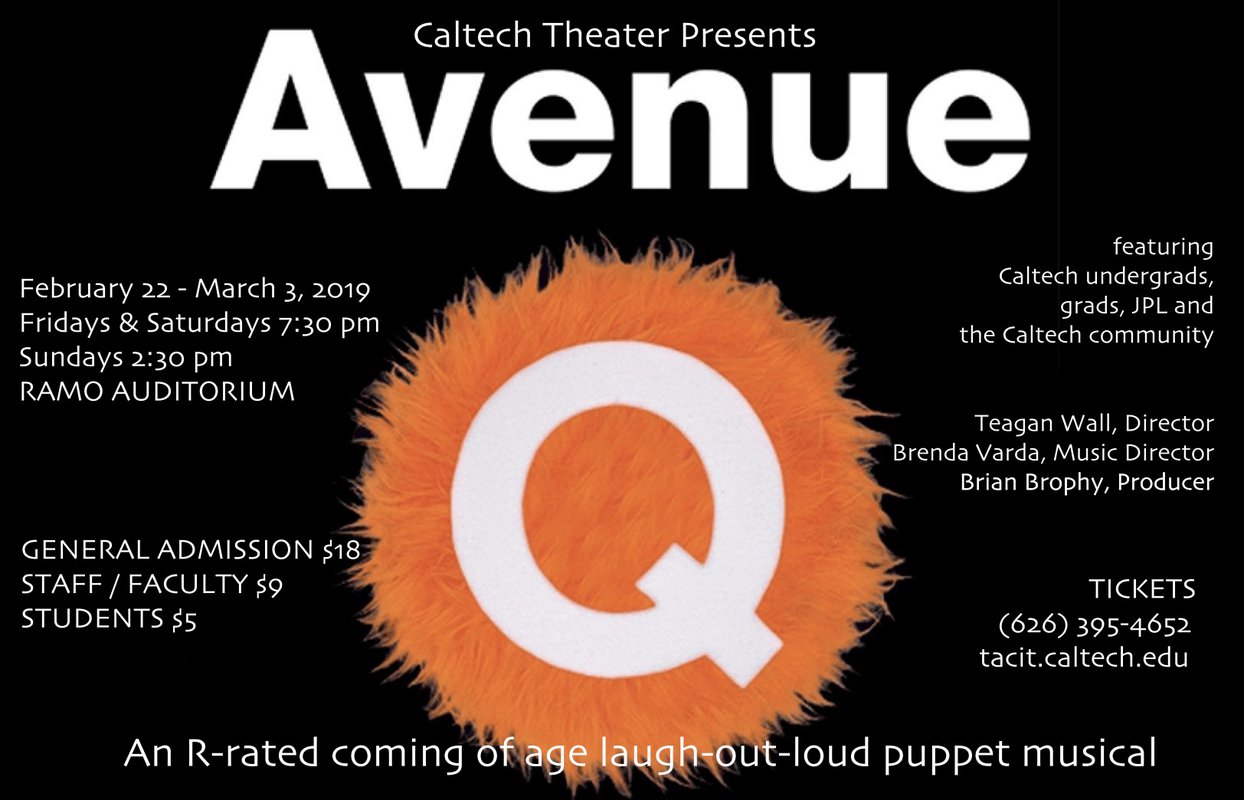